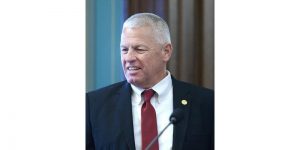 Our speaker for this evening’s event will be State Senator Jon Bumstead.

Growing up in Newaygo County, Jon Bumstead had a passion for the outdoors, not the classroom. Senator Jon Bumstead did not follow what many would consider to be a ‘typical’ career path. During high school, Senator Bumstead enrolled in Newaygo County’s Career Tech Center. It was during this time that he decided to learn construction trades, and pursue a career as a home builder. The decision to learn skilled trades instead of taking the traditional college route ended up being one of his best decisions as he spent 39 years owning his own construction business. After watching the state make bad decision after bad decision, Jon Bumstead ran for state representative in 2010 and served for six years. In 2018, Jon Bumstead was elected to his first term in the Michigan Senate, and his experience as a small business owner is why he continues to be a strong advocate of skilled trades to this day.

Sen. Jon Bumstead a lifelong resident of the 34th Senate District. He was born in Fremont and is a graduate of Newaygo High School and the Newaygo County Career Tech Educational Center Building Trades Program. He began his own construction firm 39 years ago and over the years, Bumstead Construction has built and remodeled many homes.

In 2010, Bumstead was elected to represent the 100th District in the Michigan House of Representatives. He served three terms in the state House and was term limited in 2016. In that time, he served as vice chair for the House Committee on Appropriations, and was a member on several appropriations subcommittees.

In 2018, he was elected to represent the 34th state Senate District, which includes the counties of Muskegon, Newaygo, and Oceana.

The senator is also an avid sportsman. He is a member of the National Rifle Association, Michigan United Conservation Corps and is the former president of the Safari Club International’s Michigan chapter. He has hunted in Canada, the Arctic, in northern Australia and in Africa. He’s also hunted in Alaska and all 48 states in the continental United States.

Bumstead is also active in his community. He is a member of several Chambers of Commerce throughout the district, the Michigan Home Builders Association, among many other local groups. He also served as a volunteer firefighter with the Newaygo Area Fire and Rescue Command.

Thanks to Allied Mineral for sponsoring this event.

Social Hour 6:00 to 6:45 with dinner and presentation to follow. Bella Maria’s is located at the Oak Ridge Golf Club.

To sign up for the event, visit or Eventbrite page.